Ancient Indian temples and its architecture are very famous worldwide. We are going to see one of the best groups of temples at Khajuraho in India. Khajuraho Group of Monuments is a group of Hindu temples and Jain temples. It is one of the many

they are categorized into three groups:

We are going to glance over some of the temples from Western Group in this post. Western Group of Temples are the most visited by tourists from across the globe.

Passing the entrance gate, you will be amazed to see the well-maintained garden and temples structures distributed over that area. Moving further, on your left front, you will see a small group of temples, Lakshman Temple, Lakshmi Temple, Varah Temple & Matangeshwar Temple. Lakshman temple is dedicated to God Vishnu. It is built by King Yasovarman also known as Lakshavarman and hence the temple derives it’s named from him. Lakshmana temple was said to be the most ornate and evolved temple of its age in central India. It is best preserved in the evolved temples. This Vaishnava temple is a Sandhara Temple (संधार पद्धती) of the Panchaayatan (पंचायतन)(Five Shrined) layout. Sandhara temples are those which does have a Pradakshina Path. Pradakshina path is a track around the temple shrine, which is used for walking in the right direction–that is circling the shrine–as a mark of respect.

The prime shrine is surrounded by four subsidiary shrines in four corners at Lakshman Temple. According to Panchaayatan (पंचायतन), the prime shrine is accompanied by 4 small shrines on its 4 corners. Those 4 shrines are dedicated to five different deities i.e. Vishnu, Shiv, Surya, Ganesh & the Goddess. All these shrines are worshiped simultaneously.

As you enter into the prime shrine and proceed towards Garbh Gruh (Sanctum), there is an idol of the deity i.e. God Vishnu. The idol has three faces, where the left face is of Narsinh or Narasimha Avtaar (Human Body With Lion Face), Central is a Human Face and the Right face is a Varah Avtaar (Boar). The Surya (Sun) is carved out behind these faces. The idol is with broken hands, hence the daily worship does not take place in this temple.

Temple is constructed facing east direction as per the principles of Vastu Shastra (Science of Architecture). Therefore, when the sun rises, the light falls directly on the idol. During the progress towards the west(Sunset), the sunlight is reflected from the temples–that are facing towards the prime shrine–on the platform and then reflected directly towards the main idol. This way the temple is always brightened by the natural light. There is a stone inscription at the entrance. The inscription uses Sanskrit language and the script of this language is Devnagari. The inscription conveys the information regarding the temple, like the king who built it and when it was built, etc. One of temple from panchayatan at Laxman temple

Figure of Authority with acolytes

Next to lakshaman Temple, there was a Garud Temple. A temple dedicated to Garud (Eagle) which is God Vishnu’s Vahan. However, when the restoration work began for this temple, the idol of Mahalakshmi was installed in this temple. Mahalakshmi is a consort of God Vishnu.

Mahalakshmi temple on Left and Varah temple on Right

This temple dedicated to the 3rd avatar of God Vishnu, Varah Avtaar. A temple erected on 14 pillars and a spire on the top. The temple idol Carved in a single stone and is of approx 2.5 meters long and over 1.5 meters high. The material used in building this giant idol looks like a metal(Bronze like) due to its finishing, but it’s carved out from a sandstone.

There’s an interesting reason behind this bronze-like finishing on a sandstone. Local’s during medieval times (and still today) used to believe that when they perform Pradakshinaa (Circumambulation) around the idol, touching the idol with their hands, the positive energy possessed by the idol will be transformed into them. Hence it became customary for devotees to touch the idols during Pradakshina. So this energy receiving belief for over the centuries caused the glossy shining on a sandstone.

This Varah idol is festooned with figures of gods, goddesses and apsaras counting nearly 674 as told by our guide. There is also Sheshnaag(Snake God) depicted in a devotional posture under the Varah Idol(boar) on the pedestal. And a figure of Saraswati Goddess(Goddess of Knowledge) is carved on the nose on the front side.

Adjacent and on the right side of the Lakshman Temple, stands Matangeshwar Temple separated from Lakshman Temple and other adjacent temples. The reason for separation is, this is the only temple in the Western Group of Temples, which is worshiped every day by locals and tourists. All the other temples are in dilapidated state and worship is no longer conducted. This temple–compared to other temples in this group–is less decorated with figures of gods and goddesses.

Laxmana temple from back side

The place which turns a tourist into a Photographer 😉 with its Grandeur and Magnificence. Moving further from Lakshman temple, on back side you will see Kandariya Mahadev temple. The Chandella kingdom reached its apex under the rule of King Vidyadhar (c.1017-29 -The successor of King Gandha). King Vidyadhar also continued the tradition of building temples just like his forefathers. The authorship of the Kandariya-Mahadev temple is attribued to King Vidyadhar.

Kandariya-Mahadev temple is the largest and grandest temple of Khajuraho.

This temple is dedicated to God Shiv and a shivling (made of marble) is installed in later times. At the entrance, you will see beautiful Makar toran and above it God Shiv with Goddess Parvati. There are numerous sculptures of Apsaras & Sur-Sundaris in Khajuraho temples. Sur-Sundaris are represented invariably in the finest jewellery and in superior garments. They also show different moods and emotions. Some moods shows disrobing, yawning, touching their breasts and removing thorns from their feet. Whereas, Apsaras are shown in various dancing poses. Other temples in Western group of temples Nagar or Northern Style Architecture is used to construct these Khajuraho Temples. The aspects of this particular style are focussed on a square-shaped sanctum with a curvilinear Spire on top of the building. All temples in Khajuraho–except a few temples–are made of fine-grained sandstone and mostly in pale yellow color which resembles the skin color tone of an Indian.

According to ASI (Archeological Survey of India) book, Khajuraho sculptures can be divided in to five broad categories:

The light and sound show is organised in the Western group complex by the Madhya Pradesh Tourism Department. It is in two languages: English and Hindi. The timings for these shows are different for winters and summers.

The entry fee for the show is: Indian visitors – Rs 250 and Foreigners – Rs 700. There is no entry ticket for children below 5 years.

Note: Information of pricing/timing given here may change so please confirm with tourism department before visiting.

History of Khajuraho Group of Monuments

As per ASI – Archeological Survey of India:

First recorded mention of the Khajuraho temple is in the accounts of Abu Rihan al Biruni (AD 1022) and the Arab traveler Ibn Battuta (AD 1335). Khajuraho was known as Kharjjuravahaka in ancient time. Khajuraho was Cultural capital of the Chandella Dynasty. Chandella rulers were great patrons of ART and architecture. Chandella rulers built these temples in between AD 900 and AD 1130. They ruled over Jejakabhukti presently known as Bundelkhand.

After Vidyadhar, the power of chandella dynasty gradually declined. The importance of Khajuraho dwindled. Later rulers increasingly concentrated on hill forts of Mahoba, kalinjar and Ajaygadh for strategic reasons. However, the artistic momentum of Khajuraho was not lost and the temples continued to be built here till the 12th century. Kandariya- Mahadev temple was followed by a succession of smaller but almost equally artistic temple such as Vamana, Adinatha, Javari, chaturbhuja, duladeo. Arab traveller Ibn Battuta reveals that the Khajuraho temple continued to shine in Glory till 1335.

The temple town sank from public consciousness soon after the chandella dynasty expired in the 13th century. These temples remained lost till 1838 when T. S. Burt–a British Engineer–heard of it from his palkywallah. Burt then ventured in to the forest in search of the wonders of a place called Khajrao.

After India independence, ASI maintained and preserved these temples. In 1986, Khajuraho was listed as UNESCO’s World Heritage Sites in India.

Khajuraho by Archaeological Survey of India. 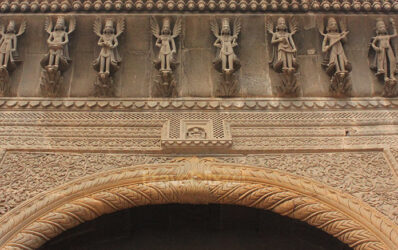